Over the last few weeks we have seen the all-too-common season ending ACL injury.

Injury of the week – ACL in AFLW

Over the last few weeks we have seen the all-too-common season ending ACL injury. Recently, Collingwood’s Jordan Membrey was ruled out for the remainder of the season due to an anterior cruciate ligament (ACL) injury. ACL injuries have been a rising concern in the AFLW, with women being up to 9.2 times more likely to sustain an ACL injury than men within the AFL system.

Most of us have heard the term ACL, but what is it? 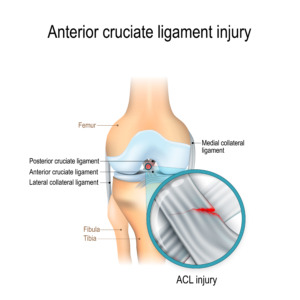 The ACL is a ligament that connects the thigh bone (femur) to the shin bone (tibia) and plays an important role in stabilising the knee, particularly with movements that involve pivoting or landing from a jump. This is why ACL injuries are common in high demand sports like AFL, which involve sudden change of direction, landing and tackles by opponents.

Why are women footballers more likely to injure their ACL than men?

There is no one definitive answer, rather there seems to be a combination of factors that place women at higher risk of ACL injury. This includes biological factors such as differences in female anatomy or bone structure in the hip and knee. But it also includes environmental and sociocultural factors which relate to differences in opportunity, training history and experience that exists between females and their male counterparts. 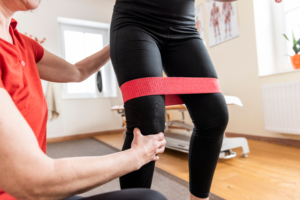 In elite sport, the ACL will usually require surgical reconstruction and a period of around 12 months of rehabilitation to return to sport. The initial phase of rehabilitation following surgery is aimed at reducing swelling and restoring knee range of movement. Once this has been achieved, athletes are guided through a structured and individualised strength and conditioning program. Between 12-20 weeks post-operatively athletes may start straight line running, progressing to change of direction and AFL specific drills in the final months of rehabilitation. Progressing through each phase of ACL rehabilitation is guided by the athlete and the support of their orthopaedic surgeon and physiotherapist.

We wish Jordan all the best with her rehabilitation and return to AFL.