Nic Naitanui sustained a high ankle sprain or syndesmosis injury in round 17 which may mean a 4thyear of missing finals due to injuries.

Nic himself reports that there are positive signs that he could have a chance of returning for finals as he still has good clinical function despite scans showing damage to the area. At this stage Nic is planning on managing the injury without surgery and he will be taking it week by week to see how it goes with rehabilitation.

A high ankle sprain or syndesmosis injury occurs when the ankle is overstretched causing disruption of the ligaments around the upper part of the ankle joint. These structures support the shin bones (tibia and fibula) at the ankle. Depending on the severity of injury the ligaments affected can include the anterior inferior talofibular ligament (AITFL), interosseous ligament, posterior inferior talofibular ligament (PITFL) and even the medial deltoid ligament.

A high ankle sprain can occur either when the ankle is twisted outwards under high rotational force or when the foot is fixed on the ground and the leg twists inwards. High ankle sprains are less common than a typical lateral (lower) ankle sprain but are more disabling and longer to recover. This is due to the fact the structures injured are not adequately able to hold the tibia and fibula joint together and can result in instability of the ankle under loads such as walking, hopping or jumping.

Imaging is recommended to rule out any fractures or secondary cartilage injury and can be used to assess the degree of instability in conjunction with the mechanism and clinical signs. These could include a stress x-ray and/or commonly MRI. 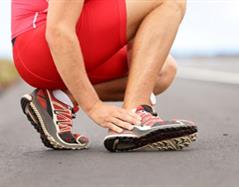 Grade 1: Generally these can be managed conservatively with rehabilitation and early intervention. It’s usually an isolated injury of the AITFL. The player may have been able to continue to play out the game after the incident.

Grade 2: Involves the AITFL and the Interosseous ligament. The joint can be stable or unstable. If the joint is unstable and the tibia and fibula are separating then surgery will be considered. If the joint remains stable then an extended conservative management approach involving an intensive rehabilitation will be required leaving the player out of the sport for a few months.

Grades 3 and 4: Generally these will require surgical intervention due to involvement of more

We wish Nic a speedy recovery following his syndesmosis injury and would like to see him playing finals in a few months time.