Injury of the week – Pectoral Tear 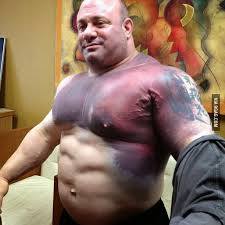 Pectoralis (Pec) Major is a large and powerful muscle that runs from our sternum and collar bone to shoulder and constitutes most the largest part of our chest. Injury to this muscle and its tendon is relatively rare and is actually most commonly seen in weightlifters (steroid use is associated with increased risk of tendon injury-make your own assumptions on the image below). It is somewhat unusual to see this type of injury in AFL, so for three players in as many weeks to suffer high grade pectoral tears, this is very unusual. Josh Gibson, Joel Tippett and Troy Dickson are the unlucky ones and have all had to have surgery to repair the damage before a lengthy period of rehabilitation. 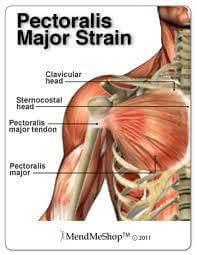 The pectoral muscles are a group of two muscles situated at the front of the chest. The largest of which is the pectoralis major muscle which originates from the sternum (breast bone), ribs and collar bone and attaches to the upper arm bone (humerus). A pectoral strain often occurs suddenly due to a high force going through the muscle and tendon beyond what it can withstand.

This typically occurs during weight training especially when performing a bench press, chest press or pectoral flys, but can also occur in the action of making a tackle in rugby and football. Sudden pain will usually be experienced in the chest toward the front of the shoulder, often accompanied with a tearing sensation. As you can see in the image below, swelling and bruising is common. Shoulder movement involving contraction or stretch of the muscle will be difficult, potentially with a noticeable divot in the muscle where the tear has occurred.