Follow along as Senior Physiotherapist Shay McLeod trains for the Hawaiian Ironman.

The Road to Kona, Hawaii

It’s been a long time in the making but finally I managed to put together an Ironman race that I am proud of.

Last June I raced Ironman Cairns. I was in pretty good condition with expectations of having a good day. Instead things fell apart badly! My first DNF (did not finish) and the end result was the bathroom floor at the hotel alternating between vomiting, dry retching and convulsing with cramps for the rest of the night. Not my best moment in front of the kids.

Within a week though, I had signed up again for the next year. I was starting to get reasonable results in half ironman distance races and be competitive, and I was determined to get it right or solve the puzzle when it came to the full distance. 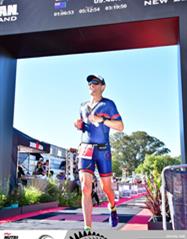 A year seemed like plenty of time, but within a couple of months things would change. Our other project came to fruition with Jess my wife becoming pregnant with our third child now due in late March. Initially I thought things might be on hold for a while, but we worked out that Ironman New Zealand could fit in well. I had been swimming with Jamie Edwards, and his JET squad for a while and enjoyed his hands-on approach
and training with his squad, so next thing he was coaching me and there was a plan.

In terms of training I would say it was a slow build initially because I was nursing a persistent calf issue, but this allowed me to further strengthen my cycling. I just got things together in time to race Challenge Shepparton in November. Interestingly I hadn’t done much running, but I had done a lot of gym work and HIT (High Intensity Training) doing stair repeats. But to my surprise I finished with close to a run PB at 1 hour 25 for the half marathon. Given these results, the stair sessions became a staple of our program!

December, January and February were really the business months. Over this period, I averaged 14.5 hours of training a week. This isn’t a huge volume compared to most but with a family I am very mindful that training for an Ironman can be a selfish exercise.I try to limit time impacts on the family to one morning a weekend so that means with work and everything else it’s a matter of becoming friends with setting the alarm in the 4’s! Having a good group around you helps and I can’t speak highly enough of the positive impact of the JET community on those early mornings and long rides.

I also tried to tick as many other boxes as possible. I enjoy the science of sport and have a personal and professional interest in endurance sport. As my journey towards Kona unfolds, I look forward to sharing with anyone interested elements of my preparation, and the science behind the scenes used in training, recovery and nutrition.

One box I was pretty good on was nutrition. Over the last two months, I cut out all alcohol and sugar apart from two light beers and only three biscuits from the bottomless Symmetry Physio biscuit tin. I am careful not to say I made any personal sacrifices over this process, rather positive value-based choices necessary when you have goals to work toward! With this, and the increase in training, a drop of a couple of kg’s in the last month may have just been the difference on race day.

Nothing goes perfectly to plan and this time a day out from the event and I didn’t have a working bike after my rear derailleur was damaged in travel. A small fortune later and everything fell into place ready to go!

Swimming for me is a work in progress. Relatively I am not a great swimmer and it frustrates me that effort doesn’t translate to speed in my case. I just look forward to getting through the 3.8km and onto the bike. Once the shambles of a start line with 1400 people trying to swim over each other sorted itself out, I found a good set of feet to swim on pretty much the whole way around. And despite feeling like I was just cruising, I did swim a PB. A modest 1 hour 6 minutes.

Usually onto the bike I feel like it’s catch up chasing the front of the race but this time I had the sense I wasn’t quite as far back as usual. I think this was a real game changer for me! I relaxed on the bike a bit instead of feeling like I had to push hard. Energy conservation is a key and I was content to sit in pace lines for periods before rolling of the front and working up the field. In the last 40km I rode solo and picked off a heap of other riders which gave me an indication I had passed things well.

For those numbers people; I train, and race guided by power (using a device on your bike that measure how much power you are exerting through the pedals). My NP was 221watts which was an intensity factor of 0.71. I knew I could have gone to about 229 which was 0.75 but I wanted to stay conservative as potentially overriding had been my undoing in the past. My variability index was a little higher than ideal at 1.08 but being a hilly course, it will often be this way. Best Bike Splits calculated my CdA (drag coefficient) at 0.258.

On the bike, I budgeted for 105 grams of mixed source carbohydrates an hour, solid, liquid and gels. This is the upper end of tolerable ranges, but my stomach goes okay and there is always wastage. In the end I also collected some banana’s at aid stations. I also had a bottle of exogenous ketones at special needs as an alternative energy source and drank about 4 litres. 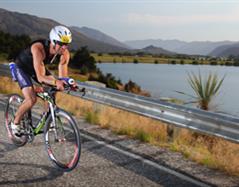 Getting off the bike after 180km it’s always interesting how the legs will feel. Never great! My goal was to go sub 3 hours 30, and to do that it means averaging about 5minutes per km. I started and my first couple of km splits were a little hot, about 4:30’s. I felt very comfortable but knew I needed to calm things down a little. The plan was lap one (14km) to try and bank a little time each km, so I had it free to spend on the last lap as things got tough. To my surprise I was still banking time through lap two so at the final turn around (28km) I reassessed my goals! I was eating well, drinking well and thought well why slow down, keep pushing and keep them under 5-minute k’s. I have ever only known absolute suffering in this last hour, so to still be running well, with good energy levels, picking off people slowly, and still not slowing much was a massive psychological boost. Even enjoyable, which I wouldn’t have believed possible at this stage of the race beforehand. Among other issues, cramp is usually my nemesis and eventually with 3kms remaining it hit! Both hamstrings, and I had to stop. Fortunately, a quick stretch and I could get back shuffling again, but another competitor in my age group who I had not long passed went by me. Bugger! I knew I was at the pointy end and a single placing could be vitally important. Not what you need at the end of an ironman, a shoulder to shoulder footrace! Anyway, after a couple of hundred meters of this I tested the legs and realised I actually had another gear in me, well half a gear at least, which as it turned out was enough! Enough for a 3:19 marathon (4:43min/km) and enough to get me a slot to Kona by about a minute!!! Boom!!!

The finishing line was an emotional place for me and the first thing I did was find my phone to ring home and talk to my wife. Jess is the only one I have openly talked to about my goal of qualifying for Kona one day. Others have asked but I have always been pretty non- committal in my responses. While I had to wait until the next day to get lucky at rolldown I was really proud of my day. A few years ago this was out of reach, but slowly I have chipped away and with a lot of commitment it’s grown closer, become a maybe, and is now happening. Setting goals for yourself that challenge you physically and mentally, that scare you, that you aren’t sure are possible, that may take years to achieve, and reaching those goals is hugely rewarding.

So, a massive thanks to all for the support, especially from Jess and the family. I was able to support her through a different type of endurance event less than a week later. The birth of our baby boy Max. It was certainly a big week! Thanks to Jamie for his passionate coaching and the JET community. And to the Symmetry team for their support, especially Abby and Ally for keeping me going.