Running for all ages

Staying young, how running can help.

Staying young, how can running help?

The age-old mindset (pun intended) that I often come across in practice is “I am getting too old for this”. It could be the back pain that you never used to have, or the aching knees and feet after a long day. An undeniable fact is that the aging body does not adapt and recover as quickly as it used to.

For runners, the internal struggle between the mind and body often hits hard at a certain point in time. The love for getting out and turning the legs over, experiencing that euphoric endorphin rush, is often overshadowed by the soreness or fatigue that doesn’t resolve as quickly as it used to. Sometimes, injuries can prevent you from running at all, and when you eventually do recover, it seems like a lot of effort to return. Other times, a friend or family member might be telling you “aren’t you a bit old to be running?” Then there is the creeping thought in the back of your mind that you might as well go and take up lawn bowls or just walk.

Fortunately, there are many benefits to running, particularly as we age. Running can help to counter some of the common changes to muscle function, such as loss of muscle mass, strength and contractile rate of force development (RFD). RFD is particularly important as the speed at which the force can be produced, not just the overall force, has been shown to be a strong predictor of whether an elderly person is likely to fall or not. It is also useful in predicting independence at functional tasks such as crossing the road, getting in/out of a chair and household tasks. Therefore, running, in particular high-speed running, can help to reduce the loss of fast-twitch muscle fibres and maintain a higher level of RFD. 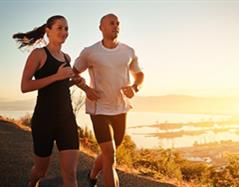 So what about those injuries? It may surprise you to learn that runners are not more likely to develop knee osteoarthritis than anyone else, despite the commonly held belief that it “wears out” the hip and knee joint. However, it is known that runners are prone to developing certain injuries, such as Achilles tendon pain in middle-aged men, or hamstring/calf/quad strains with higher speed running. Then there is patellofemoral pain, often referred to as “runner’s knee”, in younger runners. Bone stress injuries are common in female distance runners but can also occur in men. The good news is that these injuries are more often due to what we label “training errors”, meaning a mismatch in the structure of your running training compared to how much your body can handle, rather than being due to your age. The considerable benefits of running listed above generally outweigh the risk and inconvenience of running-related injuries.

Very rarely will a physiotherapist recommend that you stop running completely to rehabilitate an injury. You have already done the hard work in adapting your body to specific running loads and we won’t want to take that away unless it is absolutely necessary. Rather, it is much more effective to provide specific strengthening and manual therapy techniques in conjunction with modifying your running volume/frequency/duration to allow you to stay out on the road. After all, age doesn’t have to be (nor should it be!) the reason you give up running.